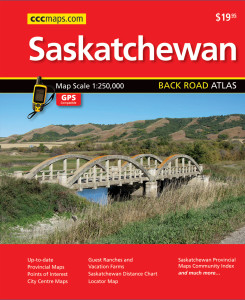 Presenting the 2014 Saskatchewan Back Road Atlas, the most comprehensive Road Atlas of the province ever created.

This nearly 300 page book features the entire Province at a continuous 1:250,000 scale with a staggering amount of new details and features which include:

Now shipping to stores or available from our online Map Store

Saskatchewan is the third book in the “Map Canada Project”.

Since January 1, 2012, the Map Canada Project has set out to create a never before seen series of paper and digital products of Canada, all at a continuous scale. The first book, Alberta, was launched in 2012 and is now in it’s third printing. The second book, Quebec, launched this Spring and is  setting new sales records.

Our next book in the series is set to be the biggest one yet.