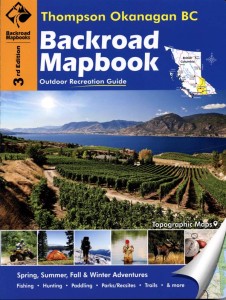 “Welcome to the third edition of the Thompson Okanagan Backroad Mapbook. In reality, this is actually the sixth edition of the former Kamloops/Okanagan Mapbook that has been expanded north to include the North Thompson or the area from Clearwater to McBride. We now cover the heart of the interior of British Columbia and include the areas around Kamloops, Kelowna, Merritt, Penticton, Princeton and Vernon to name a few. But like most new editions, this book is full of many changes and improvements. We have added endless road systems, countless new trails (including motorized riding areas) and created new sections for ATV/motorized Trails as well as Snowmobiling. We continue to adapt the maps with new off road and snowmobile line styles, trailhead markers and much more. Yes, it is definitely worth updating your old book. “

The new edition is $25.95 and available at  MapArt retailers everywhere or at the CCCmaps store:

Also new and in stock from Backroads Mapbooks: